The day before Halloween we finished our latest major milestone, after a couple months of hard crunching. It has been a major whirlwind of progress and most of the time everything’s completely broken until suddenly it’s all working. I’m very relieved to say we’ve (mostly) gotten to that point. So much has changed I almost don’t know where to start.

I think on the last update I mentioned the district map, but let’s talk about the headquarters instead.

The overarching goal of the deadline has been to make a working gameplay loop that is the basis of the game. Here’s the idea: you load into your headquarters, an inconspicuous tavern that hides your criminal organization beneath. You begin with a couple random thieves to get you started and, importantly, a storefront to sell some of your stolen goods. 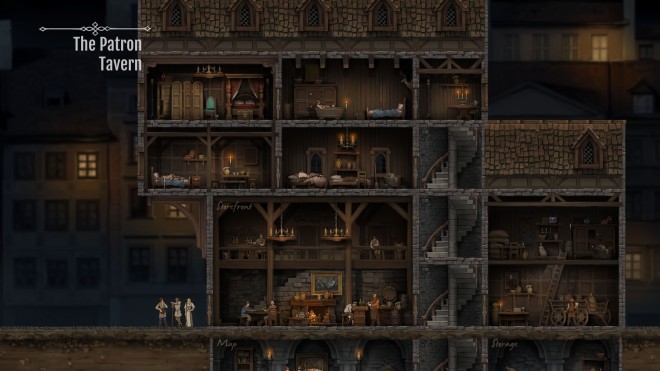 A ton of work went into the headquarters. Check out the rest below:

We finished off the background elements, sky and underground layers, which parallax with the camera. Each piece of furniture here is an individual object that has been broken out to use in random generation during heists. Pretty much every room in your HQ has people hanging out playing unique animations.

Further down are your functional rooms hidden from the regulars, including the map room where you plan out heists, the storehouse logging all the items you’ve “stockpiled”, the training room for upgrading your thieves, a recruiter to hire new recruits, and the barracks where you can view their pertinent information. 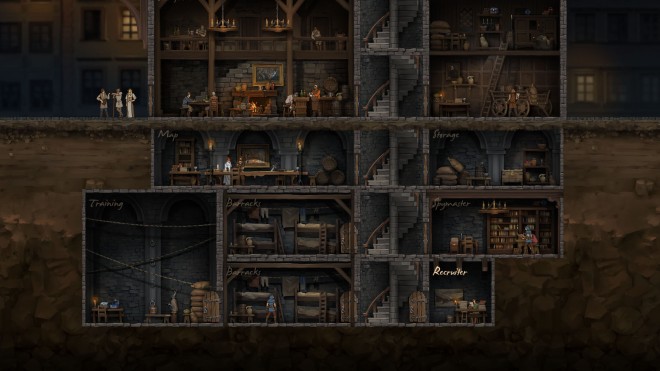 Keen observers probably noticed a spymaster room, which will come into play later. In the lower half your thieves wander the halls and eventually you’ll be able to build new rooms and expand downward for new functionality.

The headquarters is essentially your interactive menu to different parts of the game. It shouldn’t be too surprising at this point that I’ve taken a lot of influence from XCOM- even though the game isn’t turn-based alien shooting, I really wanted to capture the feeling of having your own secret base and personalized troops who you grow to have an affection for over time. Clicking the barracks will take you to the recently finished character screen: 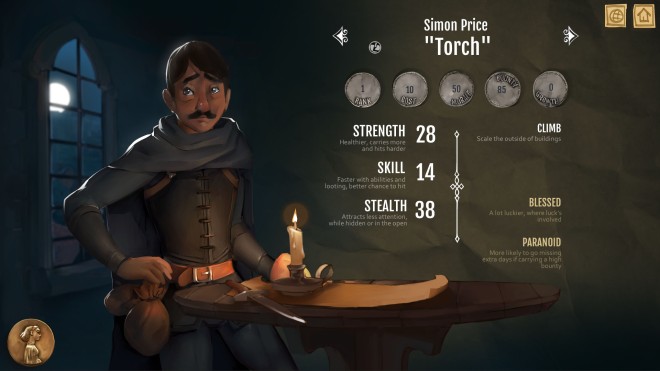 In addition to the name and stats you can see each character’s abilities, traits and flaws which are all randomly generated. The recently added button near the nickname allows you to change it to whatever you’d like. For each stat there’s a unique body type (both male and female), and each body type has multiple variations, which get matched with an assortment of heads, so even the appearance of your thieves is randomly generated.

Character art has been a lot of fun to work on. Unlike your usual heroic adventure game, the characters don’t need to look like a bog-standard Nathan Drake or a Gears of War meathead with a gruff voice. There’s some attractive ones, but there are also wiry guys, muscly women, unflattering features and faces that look like, well… a diverse crowd of people.

When I started working on heads I had a surprisingly hard time finding non-beautiful reference photos on the internet. Eventually I discovered that a lot of states publish the mugshots of local criminals, and that has been a goldmine. You’ll never find a more diverse cast of characters. So if you’ve been booked for any serious crimes in the last couple years keep an eye out, you may be painted into the game.

This isn’t all we finished for the milestone by a long shot- there’s also the completely redone district map with new functionality and so much heist content it’ll need its own update. There’s also story missions, pre-requisites and rewards to talk about at some point.

As a developer, I hate bringing up launch dates. If and when we get it wrong, people tend to get upset. The truth is, a launch date is just a guess. What I can say that our initial launch has gone from “when it’s ready!” to a matter of months. Looking forward to it, myself!